Hi there, and welcome to the Animal Jam Whip!

In today's post, I will be highlighting, featuring, and discussing a couple of unusual items that have popped up recently, with the first one being a possible other form of ''glitched ring''.

If you are unfamiliar with glitched rings, click here (but I am sure the majority of you know what I am talking about).

There are two glitched rings currently in existence - at least, up until now. Several Jammers have spotted what could possibly be a third variant of the glitched ring. It looks extremely similar to the item referred to as a "first" glitched ring (the one that is blue and sea green), except the color of the gem on the ring is slightly off. 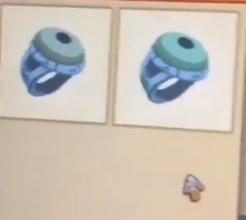 In this picture, the new variant is on the left, and the real first glitched ring is on the right. The color of the ring on the left is a bit more of a grassy green than a sea green, if that makes any sense.

No one really knows for sure how this new glitched ring came to be, but a lot of Jammers assume it was hacked into the game. Let me know your thoughts in the comments.

Moving onto the second part of the post - peculiar plushies! 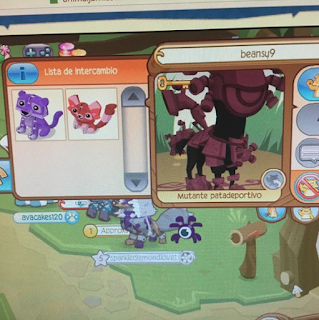 This Jammer, beansy9, was spotted a few days ago in what I believe is a Portugese server with two never-before-seen plushies on their trade list. One seems to be a big cat of some sort, and the other is either a red panda or a raccoon. Most people believe these plushies are promo items. Another thing to notice is the fact that Beansy is wearing magenta phantom armor. While there are more than enough magenta-glitched items in the game, it is safe to say that the magenta phantom armor Beansy is wearing is the first of its kind.

What's interesting about Beansy is this... 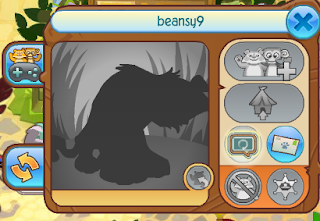 Beansy appears to be banned, yet his player card says that he's online! A bit fishy, isn't it?

That's all I've got for you today. Remember to comment your thoughts, opinions, and ideas on these strange items, and I'll see y'all later! Bye!
Posted by gingy gingy at 12:00 AM
Email ThisBlogThis!Share to TwitterShare to FacebookShare to Pinterest