Hello Jammers! Sadly today is not an update day, so for now, I am going to be discussing the latest and greatest (ha, not really ''great'') AJ drama.

Yesterday, a handful of popular Jammers were banned. These Jammers include Skorm, Typicalrocky, and Jurshy.

According to AJHQ, the reason these people were banned is because they were caught selling items on eBay for real life money. This is a big problem that's been going on for years now.

Before we continue with the post, let's lay this statement down flat on the ground: DON'T EVER SELL ITEMS FOR MONEY. It violates the Animal Jam rules and guarantees a permanent ban to your account. It's not worth all of the trouble.

Now that that's settled, let's continue with the story.

Skorm, as well as the others who were banned, admitted and apologized for their mistakes. Skorm said that he sold items that he received from fans during live streams, and made over $2,000. He also said that he felt bad that he let down his fans and promised to never do it again.

However, AJHQ had a different plan up their sleeves and permanently banned any players that were in on Skorm's gig.

As a result of this, Skorm blew up and threw a huge hissy fit on Instagram. He blamed Aparri for convincing AJHQ to ban him, Typical, and Josh (Jurshy). Aparri denies it.

So, in recap, here are the two main sides to the story:

Skorm's Side: Sold items on eBay for real money, AJHQ banned his account, blames Aparri for convincing AJHQ to ban him

Aparri's Side: Believes Skorm got what he deserves, denies having any form of input into banning Skorm

My Opinion: I think that banning Skorm and the others was the right thing to do. After all, they did violate the Animal Jam rules. But I'm not sure about the whole ''Aparri is to blame" deal.

The funniest part about this drama, though, is the fact that AJHQ ACTUALLY REMOVED SKORM FROM THEIR YOUTUBE CHANNEL ART. 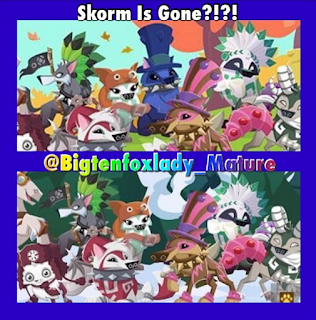 I find this really funny. XD

What do you guys think about the recent drama? Is it really worth a community war: blue versus red?
Posted by gingy gingy at 10:26 AM
Email ThisBlogThis!Share to TwitterShare to FacebookShare to Pinterest