Ever since Animal Jam was first launched, the game held a partnership with National Geographic. Although, it has come to my attention that this partnership may no longer exist, thanks to a post by the wonderful DoomyPanda on her blog, the Animal Jam Stream.

In Doomy's post, she explains why she believes WildWorks may have cut ties with National Geographic after receiving a thought-provoking Jam-A-Gram from another Jammer, and goes on to list several pieces of evidence to back up her claims.

For example, the HD Television, as well as the majority of the other televisions that currently prevail in the game, display a small variety of ''channels'' when clicked on. The first channel to pop up is an image of the National Geographic Kids logo. 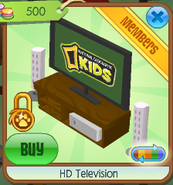 However, this is no longer the case. The National Geographic Kids logo has been replaced by the WildWorks logo. 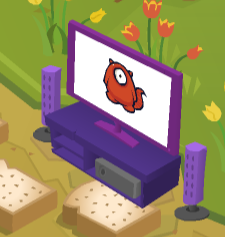 Also, where once was a collection of animal facts and what not sponsored by none other than National Geographic in Gabby's Animal Hospital now lies an un-interactive array of animal posters, as well as... three mannequins!? 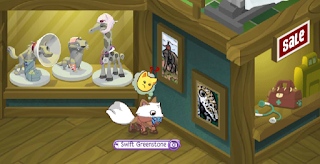 What the heck? The mannequins are promoting items that are sold at the shop just meters away... wait a minute... is this... ANOTHER CLICKY THINGY?

Why do we have TWO CLICKY THINGIES FOR THE SAME SHOP!?

Laziness at its finest, folks. Just think of all the other things that could have taken that empty spot, but NOPE! IT HAD TO BE MANNEQUINS!

Anyways, you get the main idea, right?

Additionally, unlike previous years, where the copyright statement at the bottom of the AJ screen included National Geographic now just says the following:

What do you guys think? Did WildWorks and National Geographic suffer a breakup? I wonder who dumped who... IF they even dumped each other...

Leave your thoughts in the comments. Bye y'all!
Posted by gingy gingy at 12:00 AM
Email ThisBlogThis!Share to TwitterShare to FacebookShare to Pinterest