Wow, three posts in a row!? It seems as if I'm having a splurge of ideas all of a sudden. Hehe!

Anyways, today I will be talking about Dash Tag, the latest addition to the Animal Jam app family.

From my understanding, the app is a lot similar to Temple Run or Subway Surfers, two other popular mobile games. It also has a similar 3-D design, like in AJPW.

According to WildWorks, you can collect dozens of different pets, unlock special goodies such as power-ups, outfits and stats, and do daily missions.

Ooookkkaaayyy. I wonder why Misha, of all animals, is chasing you. She doesn't even look scary at all! 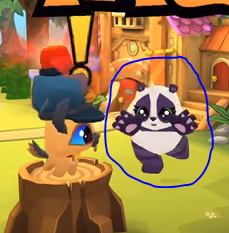 Moving on now. This app is currently in its beta testing mode, so it isn't publicly available yet. However, if you're a Canadian resident with an Android device, you have the opportunity to help beta test Dash Tag! All you have to do is download the app from the Google Play Store. The app is free to download and play, but you can make in-app purchases for an even better experience.