So, as most of you may already know, Animal Jam updated yesterday. In my opinion, it wasn't too bad. I mean, we did get a new animal (which is ADORABLE by the way), and the return of the Feast of Thanks festivities, such as Twists and Turns and pet turkeys.

But there's one little problem, and many Jammers are rather upset about it.

Remember how Club Geoz mysteriously ''fell'' a few weeks ago?

Everyone thought they were going to take Club Geoz away from us, but... how could they? How could they remove one of Jamaa's best hang-out spots like that after so many years of fun?

Well, as it turns out, they did. Yes, they actually got rid of Club Geoz... 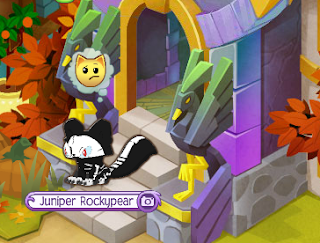 ... and they replaced it with this.

This, my friends, is the Alpha Headquarters. It's basically a museum that honors the six Alphas, as well as a bunch of important ancient relics that have been discovered during their... I mean, our adventures.

''Wait a minute, Naffy! Did you just say six Alphas!? I thought there were seven!''

You're right, there are seven Alphas. For some reason, the museum doesn't honor Tavie, the dolphin Alpha, who protects and watches over the oceans.

Poor, poor Tavie. She's been robbed too many times. If I were her, I would just resign.

Anyway, in all seriousness, the place is actually pretty neat. I like the music and the overall design of the building. There's also some cool armor sets for each of the Alphas (except Tavie, of course) for sale on the second floor, but they're all for members only, and they cost diamonds, too, similar to the other armor sets sold in the Diamond Shop.

While the Alpha Headquarters isn't all that awful, it still bugs the crap out of me that it replaced Club Geoz.

WHAT WERE YOU THINKING, AJHQ!?

Also, can we not set aside the fact that a PRODUCT based off of Club Geoz, which, as of now, no longer exists, is still available for purchase!?

Ugh. It's gonna take me a while to get over this.

That's all of the ranting I feel like doing for today. What do you guys think? Do you like how the historical and adventurous side of the game is being incorporated into Animal Jam more, or do you think it's getting a bit out of hand? I'm on both sides.

Thanks for reading. Be sure to leave your opinion in the comments!