The Secrets of Headdresses

Hey hey hey! Welcome back to my blog, everybody! ^.^

We all know what headdresses are. They're super popular nowadays and quite sought after, if you ask me. In addition to that, they make great outfits.

When headdresses were released in celebration of the Feast of Thanks in 2011, no one really cared. Sure, they were cool items and still are today, but they weren't rare, because they were currently being sold for 200 gems. 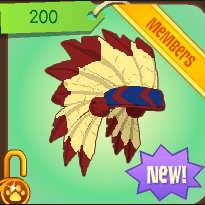 But when headdresses didn't return for the 2012 Feast of Thanks, they immediately started to increase in rarity. Today, headdresses are totally in. xD

The big question is, why didn't headdresses return? Will they ever return? They're not available as a prize in the Forgotten Desert, just like masks and Founder's Hats.

Want to hear my theory?

The reason why headdresses were no longer sold is because AJHQ thought that Native Americans might be offended.

Headdresses are sacred to Native Americans, and are to only be worn by a highly respected elders and men who have earned the right to wear them. Headdresses are not just cultural garbs, but spiritual garbs.

Last year I was harassed by a very crude Jammer who was supposedly part-Native American because my wolf's old look included a blue headdress. I understand how and why that offended him, but to this day, I still believe he could have taken the matter a bit more... peacefully. >_<

Now that headdresses are everywhere, there's not much AJHQ can do to remove them entirely from the game. As a business, they would lose a lot of players, therefore losing a lot of money.